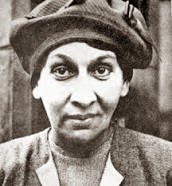 Sybil Kathigasu was born Sybil Medan Daly to an Irish-Eurasian planter (Joseph Daly) and a French-Eurasian midwife (Beatrice Matilda Daly née Martin) on 3 September 1899 in Medan, Sumatra, Indonesia. Her middle name reflects her birthplace, Medan. Her paternal grandparents were an Irishman and a Eurasian woman while her maternal grandparents were a Frenchman (Pierre Louie Martin) and a Eurasian woman (Evelyn Adeline Martin née Morrett). She was the fifth child and the only girl. She was trained as a nurse and midwife and spoke Cantonese fluently. She and her husband, Dr. Abdon Clement Kathigasu, operated a clinic at No 141 Brewster Road (now Jalan Sultan Idris Shah) in Ipoh from 1926 until the Japanese invasion of Malaya.

Sybil Kathigasu's husband was Dr. Arumugam Kanapathi Pillay, a Ceylonese (now Sri Lankan) Tamil from Taiping. He was born on 17 June 1892 in Taiping to Kanapathi Pillay and Thangam. He married Sybil in St John's church (now cathedral) in Bukit Nanas, Kuala Lumpur. Initially there had been a religious objection from her parents as he was a Hindu and she was a Catholic. However with agreement from his father, the wedding took place. They were married on 7 January 1919 in St John’s Church, Bukit Nanas, Kuala Lumpur. Sybil's first child was a son born on 26 August 1919, but due to major problems at birth, died after only 19 hours. He was named Michael after Sybil's elder brother who was born in Taiping on 12 November 1892 and was killed in Gallipoli on 10 July 1915 as a member of the British Army.

The devastating blow of baby Michael's death led to Sybil's mother suggesting that a young boy, William Pillay, born 25 October 1918, who she had delivered and had remained staying with them at their Pudu house, should be adopted by Sybil and her husband. Then a daughter, Olga, was born to Sybil in Pekeliling, Kuala Lumpur, on 26 February 1921. The earlier sudden death of baby Michael made Olga a very special baby to Sybil, when she was born without problems.
So when Sybil returned to Ipoh on 7 April 1921, it was not only with Olga, but also with William and her mother who had agreed to stay in Ipoh with the family.

Sybil Kathigasu died on 4 June 1948 aged 48 in Britain and her body was buried in Lanark,Scotland. Her body was later returned in 1949 to Ipoh and reburied at the Roman Catholic cemetery beside St Michael's Church in Ipoh. 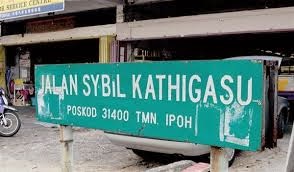 A road in Fair Park, Ipoh was named after Sybil Kathigasu (Jalan Syabil Kathigasu) after
independence to commemorate her bravery. Today, the shop house at 74, Main Road, Papan, serves as a memorial to Sybil and her efforts.

Sybil Kathigasu, is an epitome of a freedom fighter, who happened to live in the then Malaya during the Japanese Occupation. She was married to Dr. Abdon Clement Kathigasu and they had two daughters, Olga and Dawn, and an adopted son William. They lived in Ipoh, Perak but spent much of their time during the Japanese Occupation in Papan, outside Ipoh.

Sybil Kathigasu and her husband known as the Doctor spent much of their time treating many wounded and sick anti-Japansese guerillas as well as local people who are ill and in need of constant medical attention during the Japanese Occupation. They were constantly under extreme stress and dangerous situation while carrying out their duties to heal the sick and wounded anti-Japanese guerillas. The call of this selfless concern and act for these wounded guerillas came at the start of the Japanese Occupation from God.

Even with the help of many kind people of Ipoh and Papan, Sybil Kathigasu and her husband were eventually betrayed to the Japanese authorities. They were both interrogated and tortured for hours on end by the extremely ruthless and cruel occupied forces. All because she answered the call from God to treat the anti-Japanese guerillas as well as in the possession of a wireless set to listen to the broadcasts by BBC for the progress of the Allied forces in the World War II battles. Although Sybil and the Doctor had to endure extreme cruelty from their Japanese captors, never once they buckled under the extreme stress and torture inflicted upon them even though the physical and mental pain were beyond description.

However, the physical injuries suffered by Sybil were horrendous and she never completely recovered from them. She even suffered a fractured lumbar vertebrae form repeated beatings during interrogations, which resulted in partial pralysis. She underwent numerous surgeries in the effort to restore her health but with limited success. She managed to walk again unaided and attended a ceremony where King George VI awarded her with the George Medal in the honour of her bravery during the Japanese Occupation. Unfortunately, Sybil died on June 12, 1948 from septicaemia from a fractured jaw sustained from the boot of her torturer, Ekio Yoshimura.

Sybil's heroic efforts were not well-known by the younger generation of Malaysians today, even to myself. I only knew of her story in its barest form, having first encountered it in an English Language reading comprehension exercise when I was in secondary school. Thus, recently when I finally managed to procure a copy of her book, the above-mentioned title, only then I realised that she is one of the lesser known heroines of the Malaysian history, espcially on the Japanese Occupation.

This book should serve as a profound reminder to all, especially those who have read it and/or know her story well the price she had paid in the name of freedom for our country, Malaysia. Although we may have our political forefathers to spearhead in the freedom and independence of Malaysia, the story of Sybil Kathigasu should never ever be forgotten; her contributions to Malaysia's freedom is very much an invaluable part of the Malaysian history.
Posted by nabilapandi at 03:24